What do we all think about when we hear the letters TfL? Train delays? This vast organisation is belittled by these words because TfL is much more than the strikes we hear about in the news. This organisation has to accommodate for all. That’s no easy task. We entered this world when we had the task of formulating our own solutions to TfL’s greatest problems.

Our team, Mind the Girls (inspired by the notable phrase “Mind the Gap”) embraced the challenge and were particularly drawn to addressing the issue of accessibility for people with mobility aids, as there are many logistical issues, such as establishing wheelchair priority on buses. As a team, we believe that there are solutions that can be implemented to help ease the travel of those with disabilities, whether it’s a physical disability or a hidden one.  For this reason, our team feel passionate about our innovation which involves a fob and reader system at bus stops, at which wheelchair users are able to scan their fob and alert an upcoming bus they wish to take, via radio signaling; a solution we hope to roll out initially outside hospitals and care homes, and eventually nationwide.

Our idea was innovative enough to be selected as one of four finalists, “STEM”-ing from all over London. Over 60 schools registered and over 30 entries were submitted. As a result, TfL sent a film crew to re-film our presentation which was an amazing and exciting experience.

On the day of the final, we were all slightly nervous by the prospect of presenting our innovation in front of a panel of 10 judges, who were the high-ranking officials of TfL. At first it was quite daunting to be presenting and answering questions in front of a large group of professionals, but nonetheless it was a great experience. After pitching our idea to the judges, we had the opportunity to network with people who work at TfL and their affiliations in order to hear their opinions on our innovation, before the winner was announced. 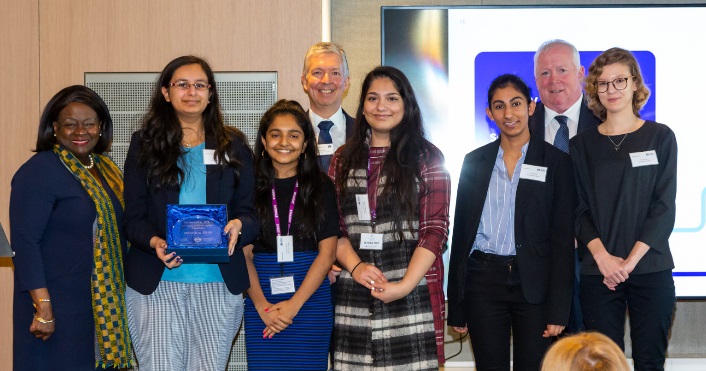 On finding out we had won, we were elated by the fact that TfL are going to take our idea forward and sponsor it! A highlight of the event was being able to shake hands with the man who was responsible for the implementation of the Oyster card system! Overall, the trip to the final was an amazing experience and we are glad to have been able to participate in. Our trophy can be seen in Mrs Hubble’s office.

On Tuesday 19th March, three members of our team were fortunate enough to attend the TfL exhibition ‘Access All Areas’ at the ExCel centre. We had a breathtaking journey in the ‘Emirate Air Line Cable Car’, across the River Thames. The view was truly amazing! Except when the cable car stopped suddenly mid-air! Bit scary…

On arriving at the ExCel building, we were introduced to our guide for the day, who kindly took us around the exhibition. There were several stalls on display, all of which were addressing the issue of accessibility of public transport and their solutions to the current problems. We had a very insightful talk with a man that works closely with TfL’s Mobility Aid Recognition scheme – a service that distributes mobility badges to passengers with mobility aids (such as scooters and wheelchairs) – who assists in their travel. He gave us very helpful feedback on our innovation and even opened our eyes to the possible areas of improvement.

We are very glad to have been invited to the exhibition, as it really opened our eyes to the issue of accessibility. It is underestimated just how complex an issue it is.

And so, our idea waits to be confirmed by TfL. In the meantime, we have all been offered a two-week work experience placement at TfL in the summer and are very excited to see how our journey with TfL unfolds. No delays, we hope!