Y6 girls had a wonderful day learning and experiencing many aspects of WW2. From having a maths lesson during an air raid to making a water chain to put out an Incendiary Bomb and even touring a 1940’s house. A great day was had by all. Below is a newspaper article about the day by Kimaya and Aroma:

On the 3rd of November, Year 6 took a trip to The Lincolnsfields Children’s Centre to explore the tragedy of World War 2. We visited four different stations in a circuit ; The blitz, The museum, The house, the Garden and the school room.

One of the First activities we did was The Blitz where we learnt lots of facts about bombs and what the weapons that armies would have been using in the war. One of the facts we learnt was how to defuse a bomb. You had to cut all three wires together or it would go off. Suddenly, the alarm went off and we had to rush inside the air raid shelter. Fear surged through our minds. We can’t imagine how the children would have felt! We learnt, even in the shelters, children still had to do schoolwork, we answered some of the maths questions of our own. If we didn’t do it quick enough or got it wrong then it would either be double homework or you would be beaten with the ruler.

The second activity was the museum. It was very informative and we learned what would be in the average soldier’s kit bag. Usually, their bag would be a khaki haversack, matching their uniform so they could camouflage. The contents of the bag were : water bottle – they would get clean water every 24 hours, a peevish blanket, clothes, a bandage – each soldier would carry one incase found injured so that the medic could quickly attend to the wounds, a radio to connect with the outside world and ammunitions. Most of the food they had was canned and revolting! Irish Stew, Cigarettes and dark chocolate were emergency rations. ‘…It must have been gruesome and tragic for the soldiers in the front line …’ (Theodora)

Next, we went to the house which had lots of different rooms! This consisted of the scullery, the kitchen, the living room and the bedroom which contained the Morrison Shelter. The very first room we saw when we entered the house was the scullery. This is where the mums would have done all the washing up. We saw items such as a bathtub and clothes pegs. When the families were having a bath the water would not be very deep or warm and they had to use the same water for each person. Imagine being the last one in!

The next room was the kitchen. In the kitchen we learnt if you got married during the war, since the ingredients for the cake were rationed, for photos instead of a wedding cake you would get cardboard and decorate it. It worked really well. During the war rats would come out a lot more as they lived down in the sewers but the shock waves of the bombs destroyed there homes so they had to take refuge somewhere else. We saw one in the kitchen. Next was the living room. We saw lots of luxury objects (Or at least they were luxury objects in those times) such as a telephone and record player. One interesting fact we learnt was that telephones were often shared with neighbours to reduce the price. We found the bedroom quite interesting seeing how they looked during the war.

There lots of fancy clothes and lots of children! Finally we saw the Morrison shelter, we learnt that men created it because not everyone had big enough gardens to get an Anderson shelter so having a Morrison was more convenient and very strong. Bibi said “I think it was very successful as it saved lives.” The house was super fun!

One of the funnest activities was the garden activity. It started with us looking at the garden and all the different vegetables, fruit, herbs etc. During the war the government launched a campaign called ‘Dig for Victory’ to encourage people to grow their own food. This was because Germans were targeting ports where the food was coming in. We next saw the Anderson shelter. We got to go inside and discovered the bottom was flooded! “It was very dark,” said one of the students. We couldn’t imagine being inside there for who knows how long!

The final activity we did in the garden was when we had to put out a firebomb. One person filled the pots and pans up, one person pumped the hose, one poured the water into the bucket, one aimed at the fire and the rest passed the pots and pans up the line. We all especially enjoyed this activity! After this we went to watch movies! The movies told us lots of interesting facts such as women’s contributions to the war and a child’s role. 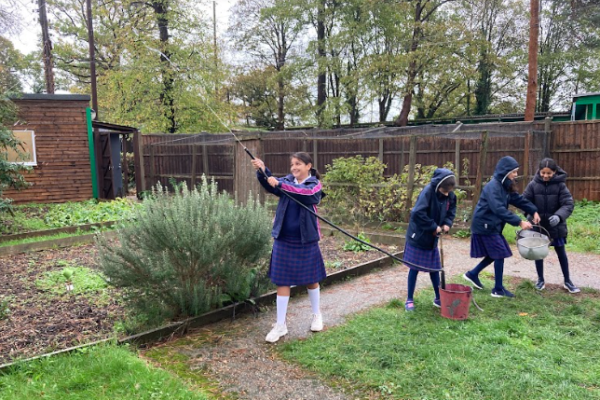 The last activity (Before the gift shop) was the school room. This gave us a special insight into the life of a war child. We learnt about Evacuation and Punishments. When a child was being evacuated they had to carry 4 main items, a gas mask, an ID, A Ration book and a Label. If they had more room they could carry other things. Punishments would consist of; Getting whipped with a ruler (for the teacher) and a cane (for the head teacher). However many times you broke the rules you would get a punishment according to that. For example, if you had opened your desk without permission and the teacher saw whatever part of your body was inside the desk would get banged on. We gained a huge understanding of a child’s life during the war period.

We all thoroughly enjoyed the huge insight into life during the war. It was fun learning about it though I don’t think anyone would want to live in that period! We can also appreciate how lucky we are now. All in all everyone loved each activity throughout the day and it was an amazing experience. As said by Norah, ‘It is amazing how much knowledge has been passed onto us.’